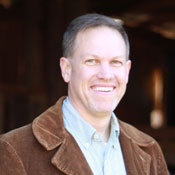 Jeff graduated from high school in 1986 from Pulaski Academy in Little Rock, Arkansas and attended Ouachita Baptist University. He graduated in 1990 with a degree in Communications.

During his stay in Arkadelphia, Arkansas, he and a friend started a graphic design business called AdVantage Advertising, using the experience they had gained from the excellent communications department at OBU. They designed logos, ads, and materials for restaurants, car dealerships and banks across the state and were even featured in a blurb in the AdWeek magazine.

After sensing a call to full-time ministry, Jeff went to Southwestern Baptist Theological Seminary in the fall of 1991 in Fort Worth, Texas. During that time, he served at First Baptist Church Garland as the young adult minister. Graduating in May 1995 with and M.Div, he moved to Monticello, Arkansas as Baptist Collegiate Ministry at the University of Arkansas at Monticello where he served for eight years.

Feeling guided to start a new church that would reach out to collegians and young adults, Jeff resigned from collegiate ministry and became the church planter of Journey Church in Monticello in the summer of 2003.

Northstar Church of Blacksburg, Virginia called Jeff to be their pastor in May 2009 after the resignation of their founding pastor in 2008. With an emphasis on “Don’t go to church; Be the church,” Jeff has seen Northstar experience growth and transformation in the New River Valley which has three colleges, including Virginia Tech.

Jeff and Carolyn have two children: Sam lives in Charlotte and will soon be a college grad. Adelyn is a sophomore at Christopher Newport University.

For more from Jeff, check out his blog at journeyguy.com.

Buy the Book from Jeff